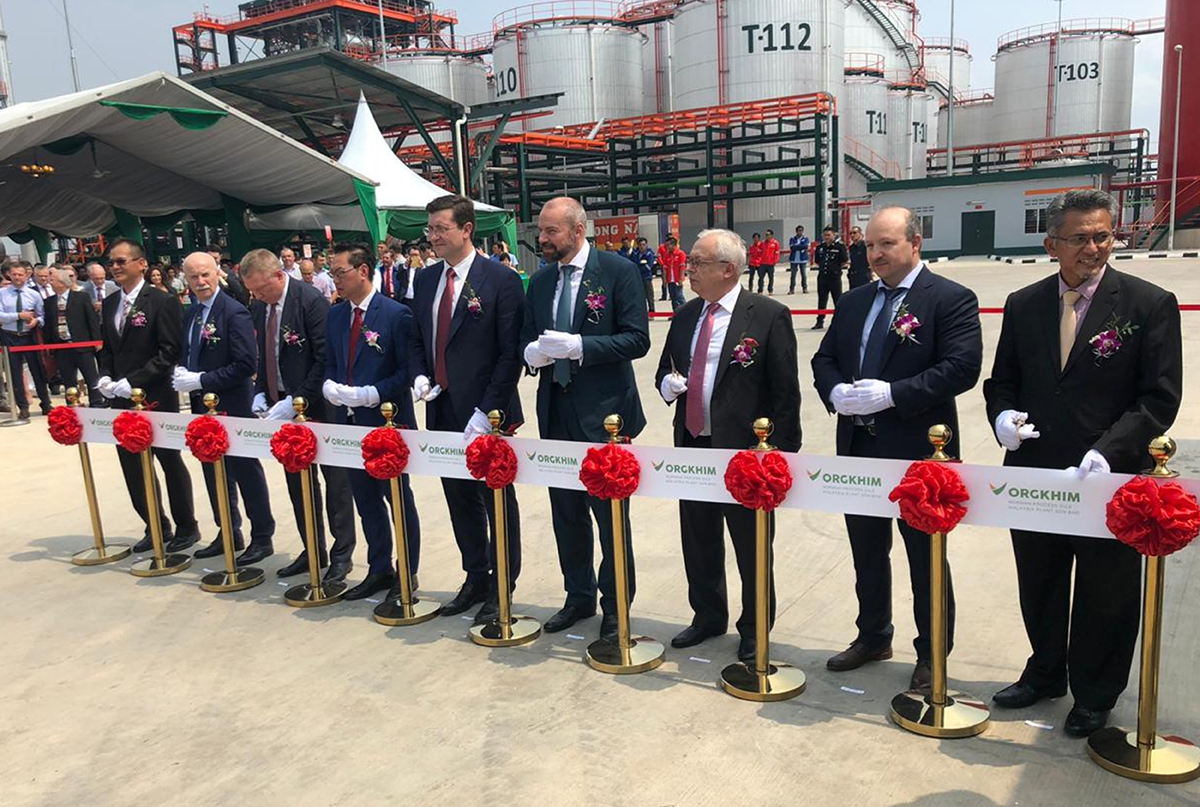 On November 7 Tanjung Langsat (Tanjung Langsat, Johor state, Malaysia) hosted the grand opening ceremony of the plant for the production of non-carcinogenic ("green") rubber process oils for tires, synthetic rubbers and rubber compounds. This ceremony has become an important step that marks expansion of cooperation between the Nizhny Novgorod region and APR countries.

«We see that Russian industry continues to expand its presence in Southeast Asia. The fact, that a company from Nizhny Novgorod has been implementing such a project, is a matter of great pride for us. The opening of a new production means that Ogkhim makes progress, stands firmly and has potential for further growth. This company from the Nizhny Novgorod region remains one of the most important taxpayers and employers, and it has plans to extend both its production and product portfolio. New products are being developed together with the Lobachevsky State University of Nizhni Novgorod, which is, in fact, together with our Research and Education Center. Investments in Malaysia mean improvement of the international cooperation within the intergovernmental commission headed by Denis Manturov, Russian Minister of Industry and Trade», - said Governor Nikitin.

As Gleb Nikitin noted after the opening ceremony, cooperation of Nizhny Novgorod Region with APR countries gears towards expansion of trade and economic relationship, with exports most of all. "Export is the priority, and Asia-Pacific countries are the main market we focus on. In 2018, the exports to the APR countries, where we have 27 partners, increased by 57%, to USD 1.4 billion. Russian President Vladimir Putin has set a task to ramp up significantly exports to non-primary, non-energy sectors. To achieve these goals and to fulfill the tasks of the International Cooperation and Export national project, we must continue to expand cooperation with the APR countries, noted Governor Nikitin.

«Today, in Malaysia, we launched the first integrated production site of our holding outside Russia and started the first Russian enterprise in this country that is so important for partnership. Investment amounts around USD 60m. We built this plant in a record time, which was facilitated, in particular, by special conditions of the project support from national and local authorities both in the State of Johor, Malaysia, and in Russia and the Nizhny Novgorod region. I am confident that our project will open up new opportunities for cooperation between our countries. This is a vivid example when a world-class technology created in Nizhny Novgorod is exported to international markets together with production facilities,» - said Nikolay Khodov, CEO of Orgkhim..

The cost of construction amounted to USD 59.2m, of which over USD 40m was provided by Gazprombank as project financing. "The project financing from Gazprombank allowed launching a plant that will not only be an important player as supplier of commodities to numerous enterprises in this rapidly growing region, but will also operate at the highest environmental standards. Being among undisputed leaders in project financing, we intend to continue our active support to initiatives that create state-of-the-art businesses and promote their products, both in Russia and abroad, said Alexander Ushkov, Executive Vice President at Gazprombank.

«Johor wanted to attract more investments from Russia, especially in the high-technology and high-value industries, as the country is strong in science and technology. We have to diversify our investment portfolio and put in more efforts by attracting new countries and to reduce our dependency on the traditional markets,» - Jimmy Puah noted.

«We look forward to expanding cooperation with Russia in such areas as modern materials and electronics, medical devices and biotechnology, optics and photonics, IT and aerospace. There are also many opportunities in education, health, tourism and hospitality,» said Ahmad Khairuddin Abdul Rahim at the opening ceremony.

The new plant uses the patented technology that Orgkhim has been implementing in Russia for more than 10 years to produce Norman product line of carcinogen-free ("green") oils for tires, synthetic rubbers and rubber mixtures. This unique technology developed in the company's own research center allows purifying petrochemical products from dangerous carcinogens. Due to the extremely low percentage of harmful components, Norman is in high demand from world leading manufacturers of tires and synthetic rubber.

The plant's capacity is 70,000 tons per year, which will add 65% to the petrochemical production of the company, and raise the share of Orgkhim sales in the Asian region up to 50% of the total volume on all contracts. A site of 2.83 hectares at Tanjung Langsat port has been assigned for the plant. The production site will provide job opportunities to people of the region and will become one of the largest taxpayers to the local budget since 78 new jobs were created during the construction and plant operation.

A terminal handler was built within the Russian investment project in addition to the plant. It is designed for the storage of raw materials and finished goods, with a view to further developing for commercial purposes. The company estimates the payback period of the project at seven years. All countries of South-East Asia and the Asia-Pacific region are considered as sales markets.

Orgkhim plant in Johor Bahru is the first integrated plant of the holding outside Russia and an example of effective support of Russian investments by the Malaysian government. Expanding the potential in the region, Orgkhim strengthens and increases its presence in the world market, opens up new opportunities for further development and modification of technologies in the field of "green" chemistry.

A land lease agreement was signed with the Malaysian side on June 23, 2015.

On February 12, 2018, a solemn ceremony of the plant construction beginning was held at the Tanjung Langsat port (Tanjung Langsat, Johor state, Malaysia). The Malaysian company Esstar Vision was chosen as the general construction contractor.

Orgkhim Biochemical Holding is a Russian innovative company, developer and manufacturer of large-capacity products of "green chemistry" with an annual turnover of more than $ 150 million. It is the world's second biggest and Russia's only technology developer and manufacturer of non-carcinogenic process oils-fillers used in the production of tires and synthetic rubbers. The Company is the leader of the Russian market in production of a wide range of forest chemical products: derivatives of rosin, turpentine for adhesives, adhesives, road markings, etc.

Orgkhim produces the world-class products, relying on the unique technologies of its own research center. The holding is one of Russia's few companies, the product of which are mainly exported: its share in the holding's total sales exceeds 60%. The company's decision-making center is based in Nizhny Novgorod, its production facilities, in Uren (Nizhny Novgorod Region), Voronezh and Lesosibirsk (Krasnoyarsk Region), the service sites have been established in Perm and Togliatti.